This past weekend I saw over on /r/unixporn that ricing Mac OSX is a ‘thing’. I used to have a lot of fun doing this on my old linux systems when I was a kid, like Enlightenment, Afterstep, Windowmaker, XFCE, and anything else I could customize to look like something from a cool ‘hacker movie’ or something like that.

The command to change the shell at startup is chsh -s.The default shells in mac OS X are installed inside the bin directory so if you want to change to the default zsh then you would use the following. Chsh -s /bin/zsh If you're using different version of zsh then you might have to add that version to /etc/shells to avoid the nonstandard shell message. MacOS X + oh my zsh + powerline fonts + visual studio code terminal settings - gist:3b41f449686a089f34edb45d00672f28.

Anyway, this got me inspired to change my desktop into something a little cooler looking than standard OSX and here’s the basic premise of everything I did.

OK, so Apple just release (couple of days as of this writing) the macOS Catalina. Catalina now uses the ZSH shell as opposed to BASH. You may have seen this. If you are like me that loves the “ugly black screen” it starts to aggravate me. Here is how to remove it. Step 1 – Get to your home directory First thing you need to find is your.bashprofile file. This file is located in the root. Bash has been the primary macOS shell since OS X 10.2 Jaguar. For almost sixteen years, MacOS developers have used it to write scripts and issue commands to the underlying operating system. Default shell options that can be switched to that are bundled with OS X include the following paths: /bin/zsh /bin/ksh /bin/tcsh /bin/bash /bin/sh. Placing any of those in the ‘Command (complete path)’ box will set the new shell as the terminal window default.

First, you’re going to want to install Brew, which is a package management system that’ll let you install additional software on your mac in a nicely controlled and updatable manner.

Now that brew is installed, we can run through the rest of the basic setup to get this going.

What I did first, was change the default shell from Bash over to Zsh, which you can see the differences here if you’re interested copy this in to your .zshrc

then, lets change the prompt

then make it permanant 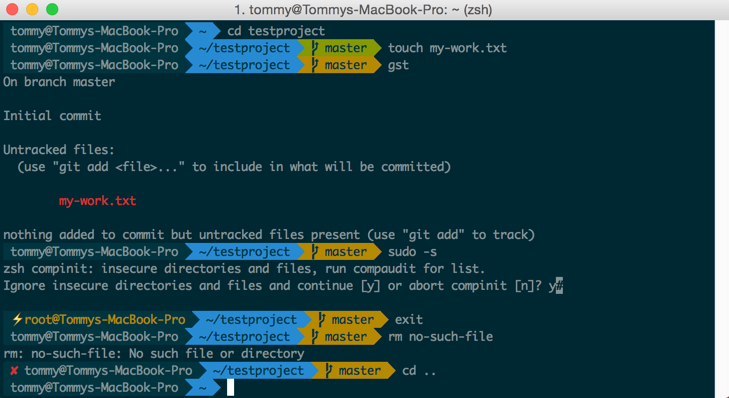 also, scroll to the second to last line and uncomment the iterm2 integration in the same file, then exit and save. Now, you should be able to start up Iterm2 and you’re running Zsh in there instead of bash.

Then change your font in ITerm2 to be a -powerline font and all should look nice.

So, next we’re going to want to install a customized version of Iterm2 to accommodating padding , and borderless which looks much cooler 🙂

So in our terminal we’ll go

Now, re-open Iterm2 and you’ll have a zsh shell with colorized ls output, running in a borderless window with 20 pixels padding on all edges. Don’t forget to change your font to one of the -powerline fonts, and try out tmux too!

Then, we’ll install KWM which is a nice tiling window manager.

now you can reboot, and you should be good to go.

After rebooting, you’ll probably want to modify your KWMrc file to your liking, here’s a good starting point.

Here’s a screenshot since they’re cool and stuff [some of it is obfuscated fyi];