Looking to buy a driver-free, fully Macintosh compatible webcam? Have USB 2.0, 3.0 or 3.1 ports? The external webcam models listed here are UVC - USB Video Class compliant. They're simply Plug and Play on modern Macs running MacOS Sur, Catalina, Mojave and Sierra, as well as OSX El Capitan, Yosemite, Mavericks, Lion, and Leopard. Some older cameras made for Windows PC's may not work on Apple Macintosh computers, or Mac web camera drivers may not exist.

Logitech Control Center for Macintosh OS X More. Check our Logitech Warranty here. Make the Most of your warranty.

Save yourself wasted money and frustration. Make certain you have USB 2.0 speed or faster ports, OSX 10.5+, and a Mac faster than 1Ghz. You can then confidently choose one of these Apple friendly driverless UVC webcam models listed below and elsewhere on the site. We're devoted to tracking the Mac friendly web camera and video conferencing peripheral scene.

UVC is a compatibility standard for USB video chat cameras. Apple's UVC Kernel Extensions are built into MacOS Big Sur, Catalina, Mojave and Sierra, as well as OSX ElCapitan, Yosemitie, Mavericks, Lion and Leopard. That means any UVC compliant external USB camera should just work when plugged into a Mac's USB 2.0 speed or faster port. No additional webcam drivers are required. Windows, Linux, Andrioid, and Chrome OS also now natively support UVC class video camera device standard.
The cams listed here are ideal as an add-on webcam for an Apple Mac mini or Pro tower. They can also provide iMac and MacBook users more flexibiity in camera placement and quality over their built-in iSight. They're also good cross-platform PC and Linux webcams for those who use VMWare Fusion, Parallels or Apple's BootCamp on their Macs to run other operating systems.
All recent Logitech's webcam models are now UVC compliant and officially supported on a Mac. However, many older discontinued mid-to-low end Logitech cameras were not UVC compliant: Depends on model number, different internal sensors, and part numbers.

'You get what you pay for...' seems to apply to many dirt-cheap no-name import USB video class web cameras. Feeling lucky? Don't care about warranty or returning it? Then explore 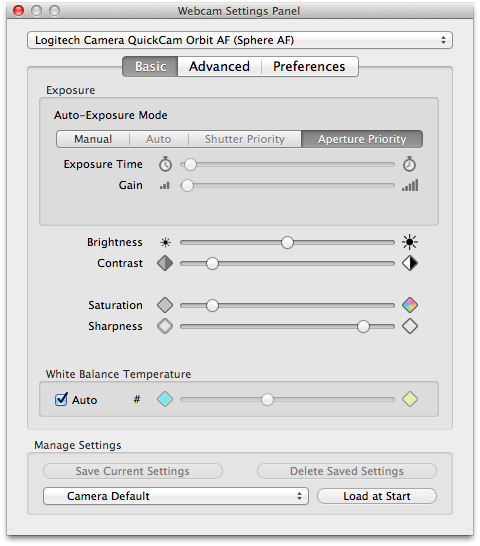 cheap webcams on eBay or Amazon for ought-to, should, might probably work on an Apple web camera options from China. In our testing, many of the cheap import cameras available for $10-$15 had high dead-on-arrival failure rates. Image quality varied widely. Some claimed to be High-Def 'HD' but were only low-resolution camera sensors. Microphones sounded poor or were non-functional. Even some of the cams with a decent image simply stopped working soon after purchase. Overall they were poorly-constructed, cheap junk with a few rare exceptions.

For long obsolete Macs from the G4 and G5 era, remember UVC compliant webcams require USB 2.0 or faster ports. With their slow CPUs, 640x480 resoultion won't overwelm them. The Mac MUST also be running OSX 10.4.x at a minimum - the point where Apple began including UVC device support into the OS.
Best Webcam For Old Macs
VGA QuickCam Ultra - 640x480 Fixed Focus

Trying to keep an antique Macintosh in use? Think FireWire instead. Modern high-resolution UVC cams simply WILL NOT WORK on old 800mhz or less Macs, who's slow and incompatible USB 1.x speed ports are FOURTY TIMES slower than USB 2.0. Those that claim to be USB 1.1 compatible in their specification listings may have utterly abysmal frame-rates on USB 1.x or show NO image at all, even though Apple's System Profiler may show that the camera exists on the USB 1.1 bus. Otherwise you're left dinking around with any of hundreds of old, discontinued webcams made for Windows and fiddling with Macam open-source drivers hoping for a combination that will work.
You can still find decent, used Apple iSight cams at Amazon or find a deal on an iSight on eBay. Sadly, Apple stopped manufacturing their very high-quality 1394 FireWire auto-focus web camera rather quickly. 1394 is better than USB for video conferencing and chat in many technical aspects: External FireWire webcam compatibility with iMovie, less CPU overhead, high frame-rates and avoids USB device contention when slugging it out on a USB hub. USB cameras aren't the only options to provide Macintosh users with high quality choices to chat and videoconference using popular Mac OSX applications like FaceTime, Zoom, Apple Messages, Skype, and ISPQ VideoChat, or for capturing and uploading clips to YouTube, Vimeo, Daily Motion or other video sites.

What are key features to look for when shopping for an Apple compatible webcam? Even though the vast majority of Apple computer systems incorporate an iSight camera into the display, there's still tremendous interest in buying an external Mac camera that offers improved image quality, higher frame rates, a better internal microphone, increased HD resolution, or additional flexibility in camera angles, mounting options, and positioning. Please see the Mac Webcam Shopper Guide

on this site for a more in-depth review of camera features to look for when pondering the optimal hardware for your business or personal video capture, streaming and conferencing needs.

Most, but not all Macs have a built-in microphone for 'good enough' sound capture. But another option is a good quality Mac compatible USB webcam with a mic that most (but not all) webcams incorporate. A separate USB desktop microphone might be desired to provide the best sound quality to dramatically improve your online streaming, voice and video capture and recording sessions.

Headsets or earbuds can help you have a far better videoconferencing, FaceTime, Zoom or Mac Skype call experience and help minimize background noise, or echo and feedback. USB headsets may have more advantages than 4-Pole 1/8' TRRS Analog mini-jack types that often compete with your external speaker system. A high-quality Mac headset comes in handy for not only Mac VOIP, video conferences and Apple speech recognition, but top notch iTunes audio playback and Podcast recording and listening as well. 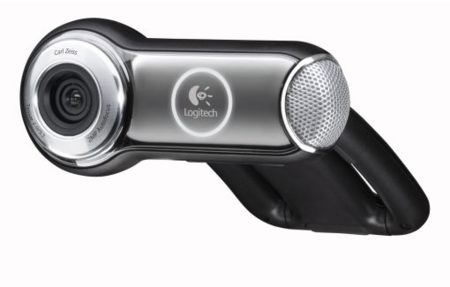 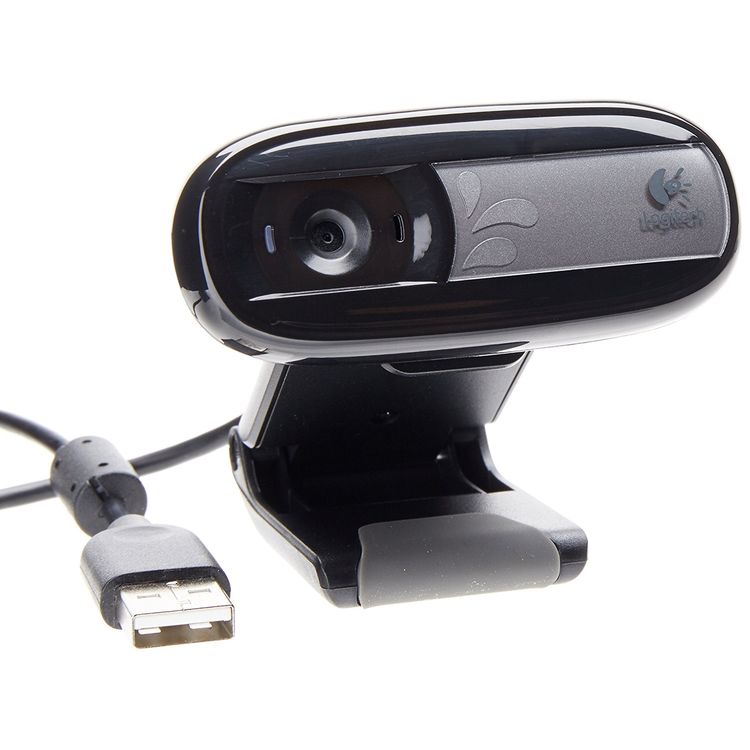 For a recent computer vision project I needed to pull images out of a Logitech QuickCam 9000 and track some markers with the help of the ARToolKitPlus library. I connected the camera to my Mac and was quite surprised to see that it just works. There was no need to install any drivers. As I learned later, that's because the QuickCam 9000 is a UVC webcam for which Mac OS X 10.4.9 already provides a driver. I was able to get to the raw camera images through the QTKit Framework in no time.

However, the QuickCam 9000 has its auto exposure enabled by default, which is absolutely deadly for stable tracking results. I thought I could just turn the auto exposure off and set it to a fixed value through some QTKit API – but no, there's no way to change the exposure of a UVC camera with QTKit. In fact, there's no way to change any parameters of your camera. No exposure values, no white balance, no gain, nothing. Apple just implemented the bare minimum in its UVC driver and the QTkit Framework.

Well, maybe I could get to these parameters through the older Sequence Grabber Framework then? After all, there's a VDIIDCSetFeatures function and a vdIIDCFeatureExposure key! But nope, as the name implies, this stuff only works for IIDC cameras. What's an IIDC camera? Wil Shipley asked the same questions almost 3 years ago - even back then, IIDC cameras were pretty much deprecated. Still, these cameras are the only devices that Apple provides an API for, if you want to change some esoteric parameters no one would ever need to change, like oh, the exposure time or white balance temperature for instance.

Apple is aware of the problem but hasn't done anything to solve it. And Logitech apparently doesn't see the need to provide a Mac driver for their cameras, since Mac OS X already ships with one. Great.

But wait, UVC is a standard, right? USB.org provides a documentation for all device classes, and the Video Class is no exception. So, I poked around in the documentation for a while, read some Linux UVC driver sourcecode and used Apple's USB Prober to see what's going on. After some more hours of playing around with the Kernel Framework's USB API, I was finally able to control some of the QuickCam's settings!

I've now cleaned up the source a bit and organized everything in a UVCCameraControl class. You can use it like this:

All the input values are normalized. Before setting a value the UVCCameraControl class asks the device for the min and max value for that setting and maps the input value accordingly. So exposure, gain, brightness, contrast, saturation, sharpness and white balance all accept values from 0.0 to 1.0.

In this example, VendorID and ProductID are the ones of the Logitech QuickCam 9000. You can use the USB Prober to find the values of your camera. In theory, the UVCCameraControl class should work with all UVC compatible cameras. However, I wasn't able to control the built-in iSight of my MacBook Air at all and I don't have any other cameras to test this with. So all I know at this moment, is that it works with the QuickCam. I've also only implemented those controls that are supported by the QuickCam – other cameras might not support all of these, or might support additional ones.

Note that you only have access to the camera if it is not in use by another process. This means you can't change the camera's settings while using it in iChat or other applications. My understanding is that if you'd want to do that, you'd have to write a Kernel Extension. The UVCCameraControl class is only useful for you, if you use the camera in your own application. So if you're doing blob tracking or marker detection or any other computer vision stuff, this probably is what you're looking for.

I also built a simple demo application that makes use of the UVCCameraControl class. This demo uses QTKit to open a connection to the first (default) video device and simply displays the images in a QTCaptureView. There's no system setting to select the default video device, however the device you selected to use in iChat will be the default (you have to quit iChat after selecting your camera, otherwise it will be locked for all other applications).

The controls currently supported by the UVCCameraControl class are:

Consider this as public domain. Do whatever you want with it. I'm not responsible if your camera explodes or for any other damages this software might cause!